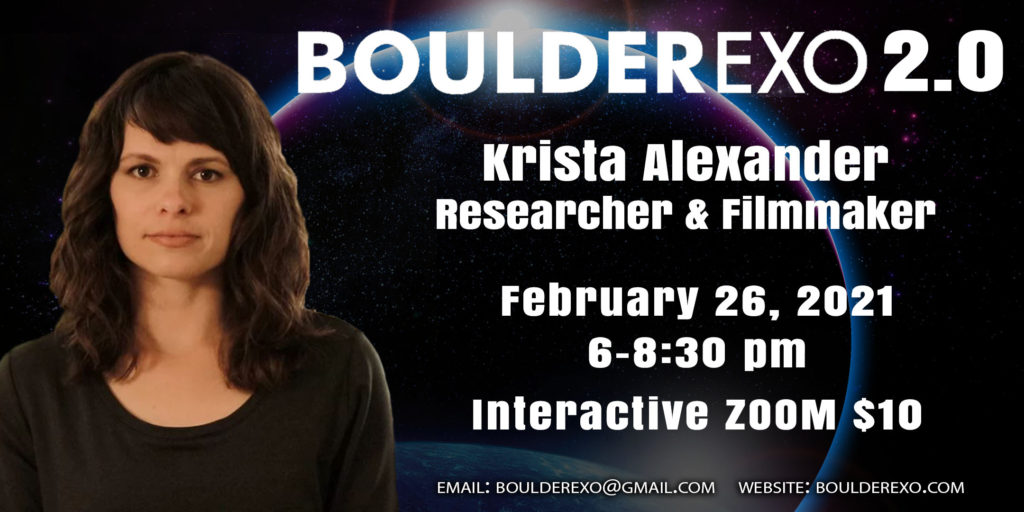 ON ZOOM – February 26, 2021
Krista Alexander, Researcher and Filmmaker
will talk about LIGHTS IN THE SKY

People all over the world see strange lights in the sky they can’t explain. Filmmaker and researcher Alexander analyzed videos of the lights and discovered the unexpected. She produced and directed a documentary to share her findings and it is distributed worldwide. Unlike most all other UFO documentaries claiming the lights are metallic spaceships carrying aliens from a far off galaxy, Krista demonstrates why this theory might be wrong and suggests alternative ideas using scientific theory, turning a page in UFO investigations.

Krista will discuss her film “Lights in the Sky” and her experiences as a novice in the field of Ufology. The discussion will also include new theories and evidence from other fields of study that have connections with the lights in the sky, from near-death experiences to human consciousness. As sightings of the lights continue to rise, now is the time to ask the right questions.

Bio: Alexander is a researcher and filmmaker, known for her film “Lights in the Sky”. She served as a Broadcast Journalist in the U.S. Army, including a 15-month deployment to Iraq, and has worked on various major motion films and national television productions. Krista has lived all over the world, including Japan, Hawaii, England, Italy and 13 continental states. She earned a Bachelors of Arts in Humanities from the University of Maryland and a masters degree in Communications in Media Management from Colorado State University. Krista now lives in Virginia with her husband and two children.