Home Past Events A Journey through the Quantum Nexus – Kirk D. Bradley – August 30, 2019 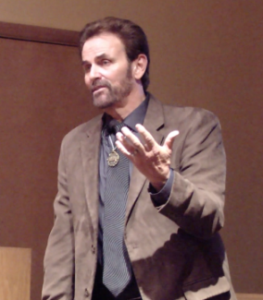 Kirk Bradley will share details about his unique path, which he calls his “Journey through the Quantum Nexus” and how through solid scientific and engineering principles, lucid dreams and surreal experiences he became deeply involved with some very ancient and futuristic concepts that are on the verge of manifesting. Intuitively and spiritually guided since childhood, Kirk was prepared for life as both a NASA scientist and a divinely inspired artist. Soon after a tour in Afghanistan, however, as a civilian water quality specialist helping the coalition troops in 2011, he began having new and startling experiences that caught him by surprise. Kirk will talk about how his innate ability to tap into the Akashic records and his almost daily “downloads from space” have served to integrate his visionary art and the new technology he has been guided to develop towards advancements for the evolution of humanity and the betterment of our Earth. He will discuss a Genesis for enhanced life in a new world that is all about interconnection and which includes each and every one of us.

Kirk Bradley has worked as a rocket scientist, inventive engineer and CEO of a research, design and fabrication business.  He has 3 degrees and holds various professional certifications along with multiple previous security clearances and licenses. He was awarded four (4) U.S. environmental patents related to water treatment, energy conservation, reuse and recycling concepts. He constructed and managed two municipal water reclamation plants and worked as a civilian Water Quality Specialist in Afghanistan. He is also a visionary artist and an Akashic records reader who became intuitively inspired to create a new organization of companies and like-minded individuals called the Quantum Nexus Group devoted to spearheading enlightened technologies and visionary concepts to help in elevating a worldwide consciousness shift in mind, spirit, and body.  www.luminationsofkirk.com